The Elisabeth Köbler Embroidered Taufschein, part of the Goschenhoppen Historians Fraktur collection, is one-of-a-kind. Worked in 1830 by someone with the initials of J. K., it commemorates the birth and baptism of Elisabeth Köbler born fifty-four years earlier on October 9, 1776 at the “Blue Church” in Coopersburg, Pennsylvania. It’s hard to imagine what the occasion was that prompted the creation of the Taufschein. Whatever it may have been, this special gift definitely was intended to be a public remembrance for it is framed to be hung on a wall—of itself unusual—with the embroiderer’s initials and date of creation prominently visible.

Original parish records for the “Blue Church” do exist, but are presently unavailable. Thus all following information is based on copies from several sources that were intended primarily as genealogical aids. It is hoped that some day soon the primary manuscripts will be available to confirm spellings, and to locate marginal notations that are so often not transcribed when extrapolating family history entries. Per these secondary sources of the birth and baptismal records of St. Paul’s Evangelical Lutheran Church in Coopersburg, Pennsylvania, often called the “Blue Church” because of the blue cast to its plastered stone exterior walls, Elisabeth Köbler, the baby featured in the embroidered Taufschein, was born October 9, 1776, the fifth child of Jacob Köbler and his wife Christina, née Kerschner, and baptized December 8, 1776. (Johann) Philip Wint/Wind, then aged seventeen, and Elisabeth Knöple were the godparents. 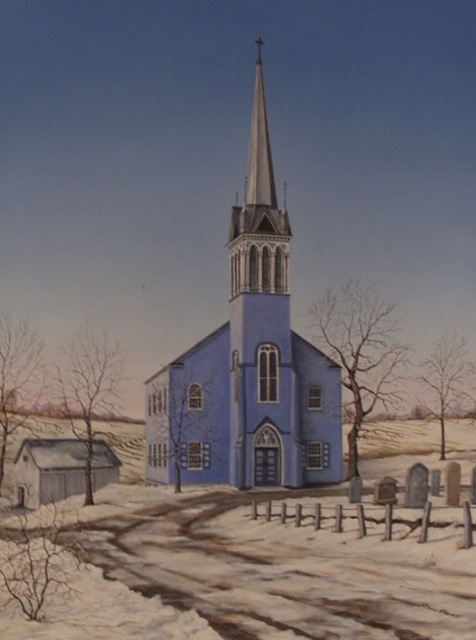 The Köbler surname has a variety of spellings in the secondary sources such as Kepler, Keppel, Koepler, Käbler, Kebler, Kepple. It is not known if this is how they actually appear, or if the letters were incorrectly transcribed. 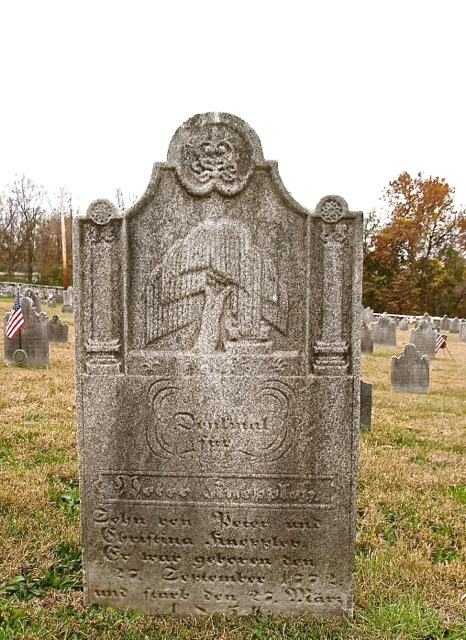 Very little information has been found for Elisabeth Knöple (also Kneply, Kneeply, Kneple, Knepple, Kneppley), one of the sponsors. There is, however, an Elisabeth Kneply who took communion on October 31,1818 at St. Paul’s, and she may very well be the same person as Elisabeth’s sponsor. Records show that after Friedens Church was built at Friedensville, Pa in 1793, the Knepli family members began attending there. In fact, some of the Kneplis are buried in the old part of Friedens Church cemetery. 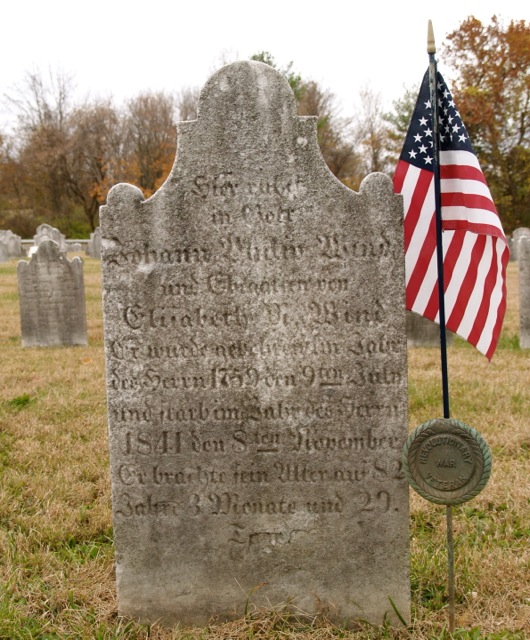 Johann Philip Wint/Wind  (1759-1841), the other sponsor, was born to Andreas and Anna Elisabetha Catharina Wind on September 9, 1759. He was baptized at St. Paul’s Lutheran “Blue Church” on September 22, 1759, and per communion records maintained an active relationship with the church into the 1820s (C. Beckel, ed. Blue Church Records, p. 20). He also is known to have attended Friedens Lutheran Church on a regular basis after it was established in 1793. Per his last will and testament made July 19,1837 [Witnesses: Jacob Dillinger and Peter Newhard, and proved November 26, 1841], Wint/Wind was a very well-to-do tanner by trade, owning several tracts of land and tenements in both Upper Saucon, and Salisbury Townships, Lehigh County, Pennsylvania. It has been suggested that he may have been an organ builder or musician. This does not seem to be the case for he mentions nothing about being a keyboard or organ builder in his last testament whereas he does mention that he has a tannery that he is bequeathing to his son Andrew, and makes other references to the tanning trade, which obviously was his principal occupation. According to a credit entry for Philip Wint, Sr in the original Friedens Church account records, he actively supported building and maintenance projects up to May 1841. He died November 8, 1841 and is buried in row five of the old part of Friedens Church cemetery next to his wife Elisabeth Mohry Wind/Wint. 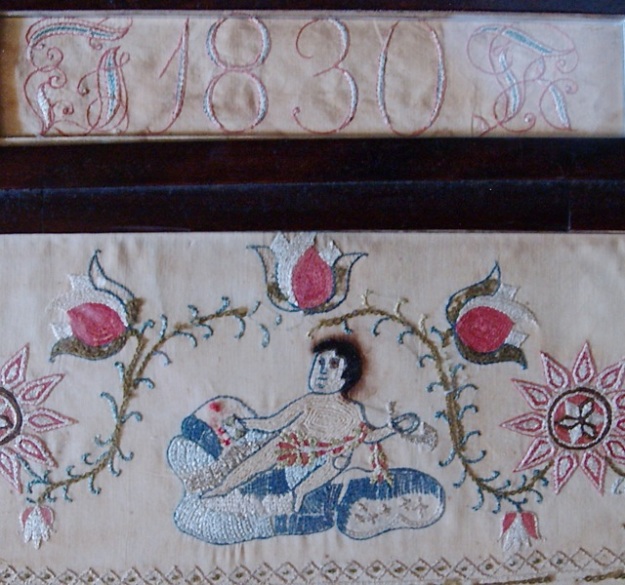 The Goschenhoppen Historians bought the Elisabeth Köbler Taufschein from Elwood Hoot, an auctioneer at West Point near Lansdale, PA for $125 ca. 1964-1970 according to an accession note, and entered it officially into the collection in 1972. Both the separately embroidered initials and year J 1830 K, and the Elisabeth Köbler Taufschein are worked in cotton thread, two ply polychrome silk thread and wool yarn on a bleached cotton ground. Kinds of stitches include: cross, chain, and French knot.

The embroiderer replicated in her embroidery the main decorative elements Heinrich Ebner (1783-1850), printer in Allentown, Pennsylvania used in his printed Taufscheins of the early 1820s. These include the reclining putto atop a billowing cloud in the center at the top of the piece. He is facing to the left, and holding a hunting horn in his left hand, a sealed envelope in his right. Facing inwards and standing on clouds are two angels, who flank the central birth/baptismal text. Both are equipped with lyres: The one on the right is holding a wreath with her raised right arm, and the other on the left is looking at a bird perched on her elevated left hand. Below each angel is a bird sitting on upward-stretching boughs, grasping at berries above him. Branch and bird form a symmetrical unit and face inwards. The embroiderer added additional elements not present on the Ebner Taufschein such as floral vines of tulips and flowers reminiscent of the sun; a cherry tree in front of each angel, and a sleek bird at her feet. The ever present baptismal verses announcing the brevity of life and importance of baptism usually found on printed Taufscheins of the period are noticeably absent from this piece.

The birth and baptismal certificate is not only embroidered, but also originally watercolor or tempera was used to paint the putto’s hair and body, as well as the angels’ faces and arms. Its mahogany veneer-on-pine frame is original to the Taufschein, which was intended to be a display piece. Dorothy McCoach, a leading textile conservator, conserved the piece in 1996, at which time the embroidered Taufschein was removed from the frame and its tacked mounting. Upon completion of conservation procedures, the two embroidered pieces were hand-stitched to cotton polyester slipjacketed 4 ply museum board and reframed in the original frame. The two original wood backings were returned to the Goschenhoppen Historians. It was hoped that perhaps additional information about Elisabeth Köbler had been appended to the backings, but, per Mrs. McCoach in an email response of October 26, 2015, nothing was written on either one.

Fortunately, with digital magnification, it is possible to read the much faded embroidered Fraktur script:

A daughter was born to these two married people Jacob Köbler and his legal wife Christina, maiden name Kerschner, on the 9th of October in the Year of Our Lord 1776. This daughter was baptized and received the name Elisabeth. The sponsors were Philip Wint and Elisabeth Knöple.

The embroiderer of Elisabeth Köbler’s Taufschein had to be someone, either a family member or a friend, who had access to Elisabeth’s birth and baptismal information possibly from St. Paul’s Lutheran “Blue Church” records or from a family member. Had there been an original birth and baptismal certificate from which to work, one suspects the motifs from Ebner’s printed Taufschein, contemporary to the time in which the needleworker was actually making the piece, would not have been substituted for original decorative elements. We don’t know if Elisabeth was still alive in 1830, but if so, as already mentioned, she would have been fifty-four years old. Johann Philip Wind is the only one for whom we have additional records attesting to some of his life activities. The needleworker who worked this embroidery could never have guessed that this token of her hands and heart would one day be one of the very few footprints left to show that Elisabeth Köbler, her family, and her baptismal sponsors ever walked this earth. 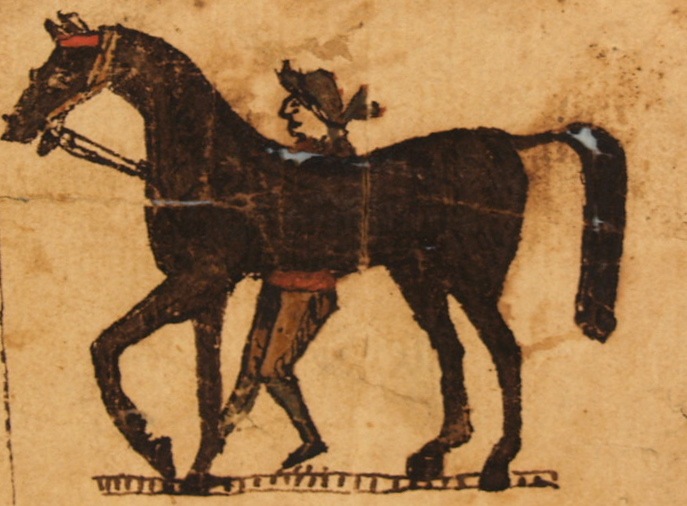 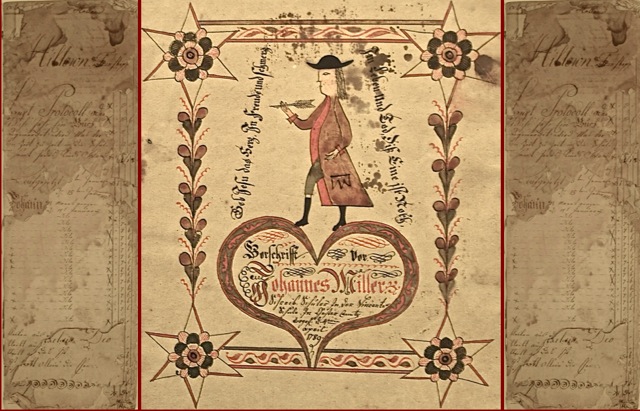 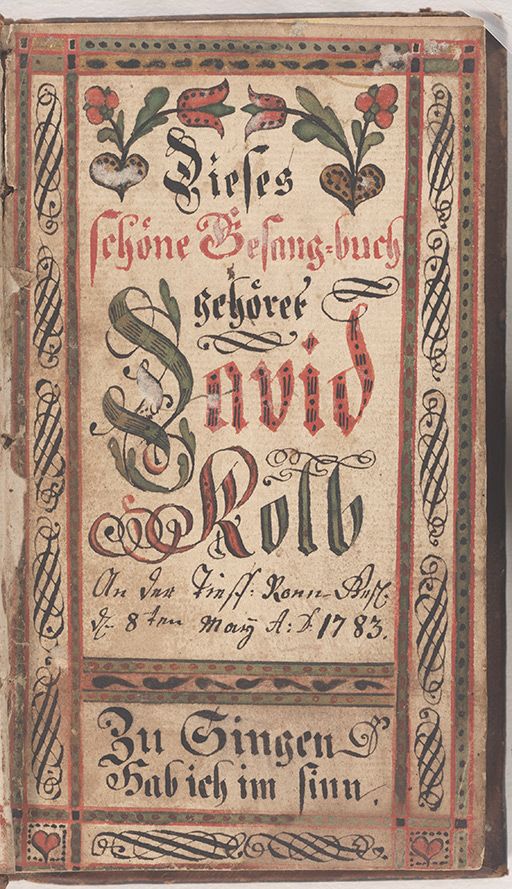 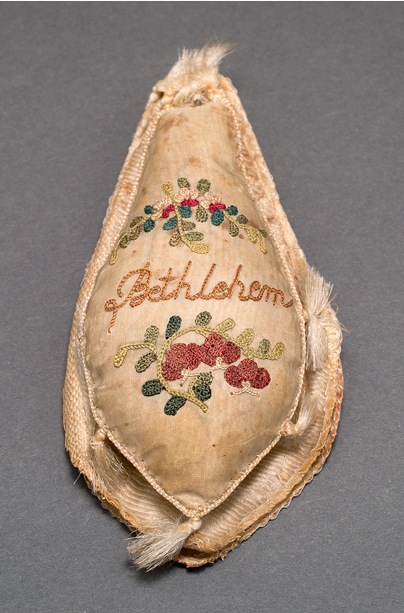 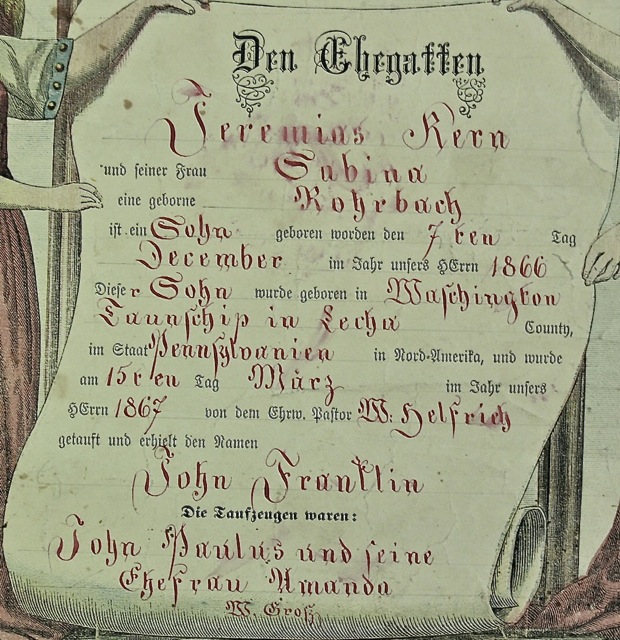 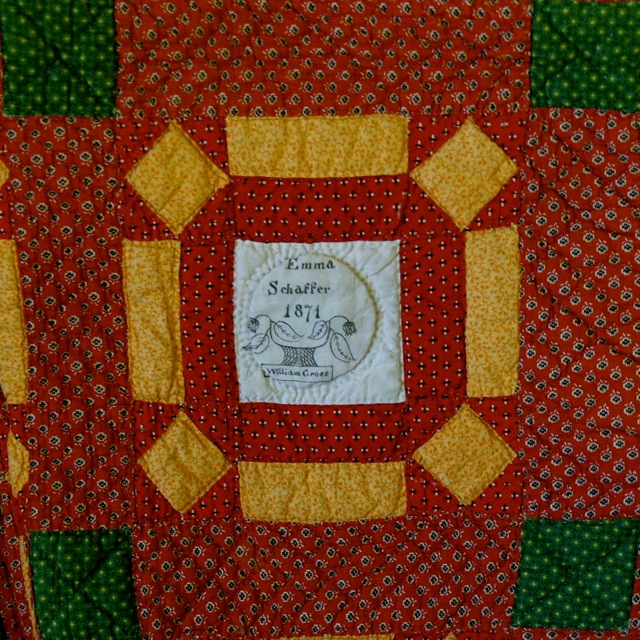 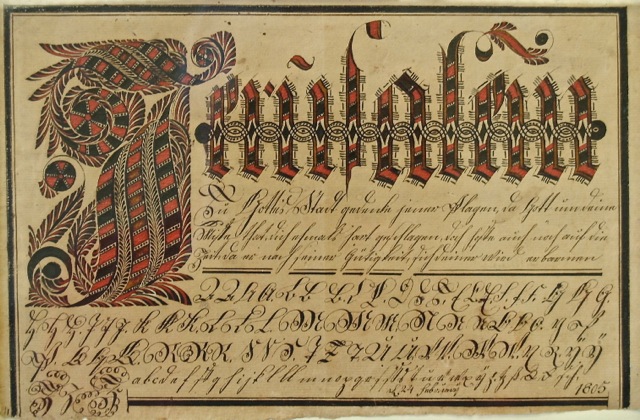 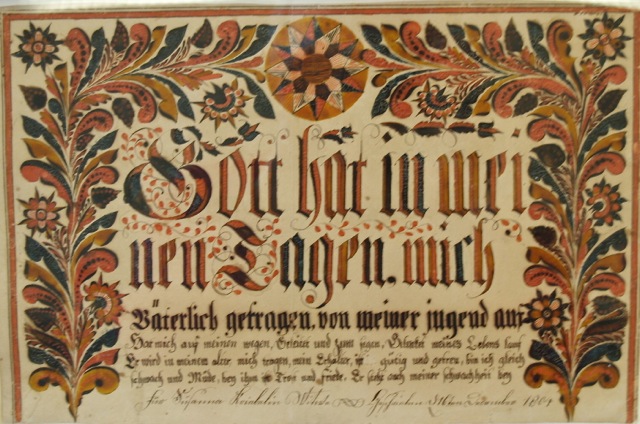 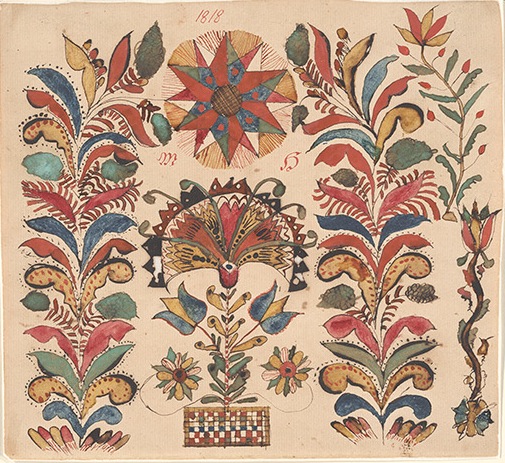 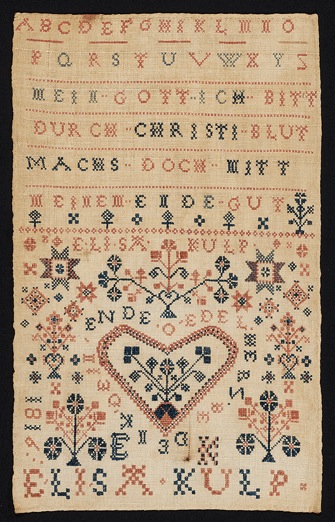 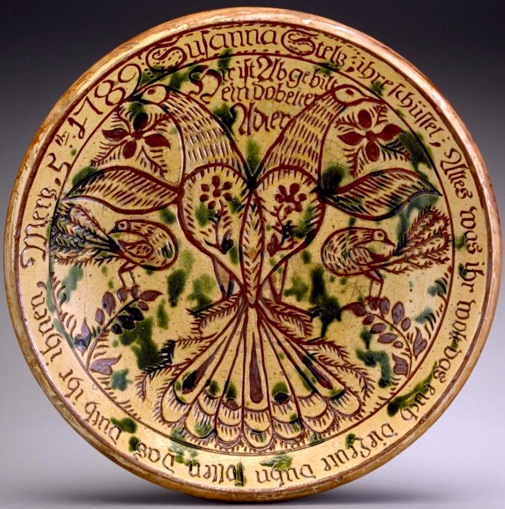 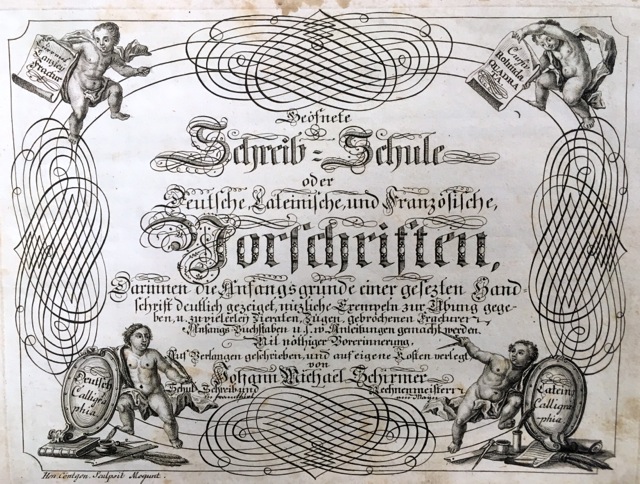 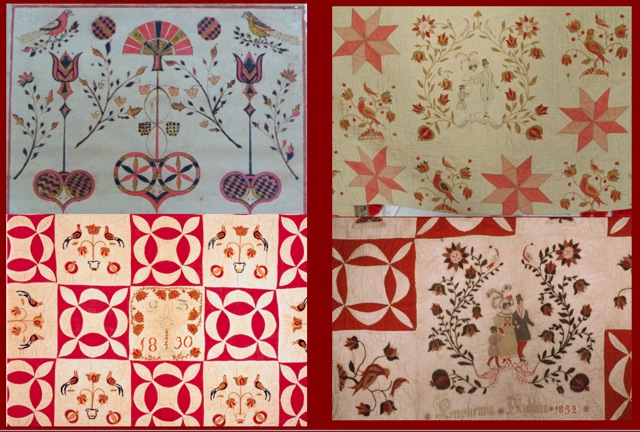 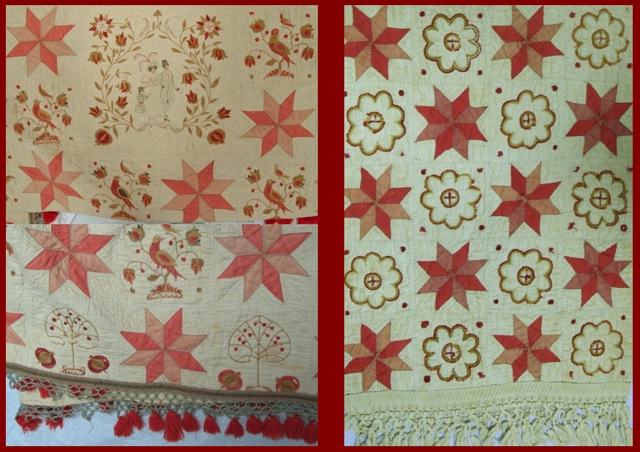 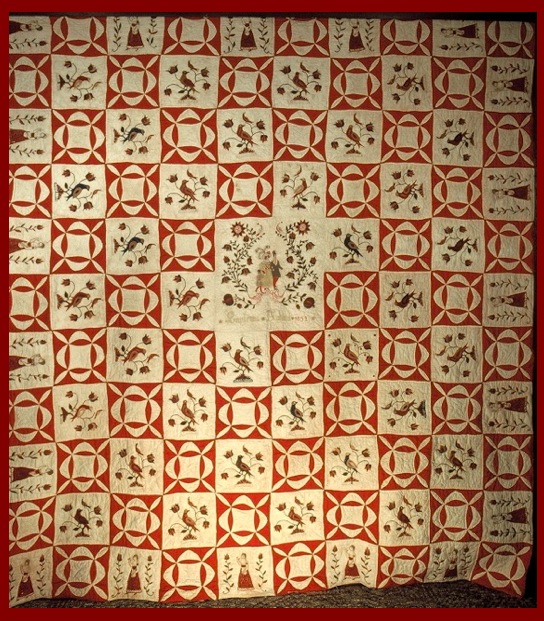